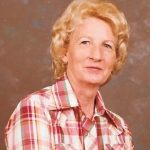 On June 22, 1947, she was united in marriage to Carroll Dean Ferguson by Rev.Wilbur Longstreth in the Methodist parsonage in Memphis.  Two daughters, Carol Lee and Debra Ann, were born to their marriage.

Marian was a farm wife and for many years raised a large garden and assisted on the farm.  She was a talented cook and seamstress and was a 4-H project leader when her daughters were members.  She was especially proud of having earned her real estate sales license.  She was a member of the United Methodist Church.

She was preceded in death by her parents; her husband; her brother, James Hemphill; son-in-law, Donald Burrus; nephew, David Fry; and niece, Linda (Hemphill) Bell.

Gravesite services will be held at 11 a.m. at the Prairie View Cemetery near Azen in Scotland County with Larry Smith, pastor of the Downing Christian Church, officiating.