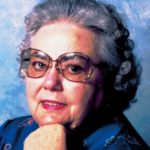 1-2 p.m.
Prior to the Service
Gerth Funeral Home

She was born the daughter of Alva Marion and Martha Rosa (Clatt) Sears on March 21, 1937 in Scotland County.

She graduated from Granger High School in 1955.

Luella married Wendell Elbert Jones. For many years the Jones resided in Arbela. He preceded her in death on May 12, 1989.

She worked for many years as a housekeeper at Scotland County Hospital. She was also a homemaker. Luella enjoyed crocheting, quilting, and candy making. She made many afghans and enjoyed going to the Lord’s Acre Sales. She was an avid bingo player while she lived at the Scotland County Care Center, where she was affectionately known as “Lu”.

Luella was well known for homemade peanut brittle, which she loved to make at Christmas. She had many people call ahead to place their orders.

Luella will be missed by all.

She was preceded in death by her husband; parents; her son, Paul; brothers: Jerry and Larry Sears; and a nephew, Jim Sears.