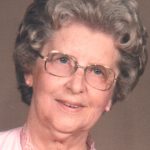 She was born the daughter of Roy Ellis and Vernice Ruth (Evans) Robinson on February 7, 1921 in Henryville in Clark County, IN.

Lola spent her younger days on the family farm with her parents and her brother, Wayne.  She graduated from Cantril (IA) High School, where she was valedictorian.   Her husband, Bill, commented that Lola was not only the most beautiful girl he ever met, but also the smartest.

During World War II, while Bill was deployed overseas, Lola was employed at the Anglo California National Bank in San Francisco, CA.

She became a wonderful cook after Bill commented to her one day, “when are you going to start cooking sweetie, we are almost out of wedding cake?”  She often shared her favorite recipes with others, including her Recipe for Life.

Lola was best known for her creative nature.   The decorative linens, Christmas ornaments, paintings and her special writings were all uniquely made by Lola.

The Coffrins had a compassionate, committed marriage.   The two were devoted to one another and cherished their time together.

She was preceded in death by her parents, husband, son, brother, and a nephew, David Robinson.