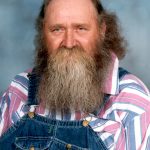 He was born the son of Victor Claud and Anna Maud (Regnold) Remley on May 9, 1944 in Scotland County.

He later married the former Wanda (Baker) Chamley on September 16, 1995.

Larry was a man of few words, but many accomplishments.  He loved a good debate.

Larry worked for Clark County for 10 years as a heavy machine operator.   He was then employed for 31 years with the Burlington Northern railroad as a crane operator.   Larry was recognized with many service awards and safety recognitions from the railroad.

Larry enjoyed collecting special treasures and antiques, along with tinkering, welding, building metal and wood items, and hunting.   He was a member of the Brotherhood of Maintenance of Way Employees.

He was preceded in death by his parents, Victor Remley and Anna Norton, and a sister, Linda Sharp.

He is survived by his wife Wanda, of the home; children Sheila Remley of Arbela and Lucas and wife Stacey Remley of Memphis; step children, June Chamley of Memphis and Wes and wife Kris Chamley of Kahoka; sisters, Margie Heaberlin of California and Vickie and husband Ron Thilgen of Kansas; brothers Jerry Remley of Iowa and Terry Remley of Arkansas; a brother-in-law, Richard Sharp of Wyaconda; grandchildren, Logan, Caleigh, and Ava Remley; step-grandchildren Bre and Clint Chamley; nieces, nephews, cousins and many friends.

Memorial services are scheduled for 2 p.m., Thursday, January 24 at the Gerth Funeral Chapel in Memphis.  Dan Hite, pastor of the First Baptist Church in Memphis, will officiate.

Visitation is at the funeral home an hour prior to the service from 1-2 p.m. on Thursday.