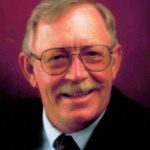 He was born the son of Bertsel Garnet and Xona Verlene (Sperry) Stewart on April 30, 1944 in Norborne, Missouri.

Larry entered the United States Navy on February 5, 1964 in Carrollton. He served in Vietnam as a corpsman attached to a Marine group. Larry earned a Vietnam Service Medal, Vietnam Campaign Medal, National Defense Service Medal and a Good Conduct Medal for his service. He was discharged on May 3, 1968.

He married the former Diana Moritz on December 20, 1969. They later divorced.

He enjoyed hunting, genealogy, collecting guns, working on cars and was interested in politics. Larry was especially proud of his Scottish heritage.

A celebration of life service was held February 27 at the Gerth Funeral Home in Memphis. A private inurnment, with military rites, will be held at a later date at the Missouri Veterans Cemetery in Jacksonville, MO.