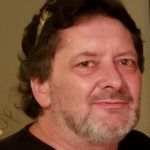 Kevin Alan Goosey, 56, of Memphis died Friday morning, June 7, 2019 as a result of injuries in an automobile accident.

He was born the son of Jackie Lee Goosey and Mary Ann (Crawford) Williams on January 18, 1963 in Kirksville.

Kevin spent the majority of of his youth in Memphis where he enjoyed everything outdoors, playing with his brothers, exploring the Crawford area, working on cars and numerous other activities. He grew up in the Memphis First Christian Church.

He graduated from Scotland County R-1 in 1981. He married Polly Seppelt on June 6, 1983 in Las Vegas and to this union a daughter, Jessica Lynn, was born. Their marriage dissolved in 1989.

Kevin held a variety of jobs in his lifetime. He was a meat cutter at J’s Foods, detailed cars at his father’s auto dealership, worked with his brother at the furniture store, ran a newspaper route in Denver, CO, detailed cars and boats and had other jobs. Kevin’s hobbies included collecting chess sets, antiques and fixing things.

He had a big heart when it came to those around him. He always saw the good in almost everyone. He was quick to help a neighbor in need, a family member or a friend. Kevin became disabled due to a car wreck in 2002, but he continued to find ways to occupy his time and help others. He enjoyed exploring for treasures and sharing his finds with his family and friends. Others have said that he had a true kindness in his heart and his family knew this to be true.