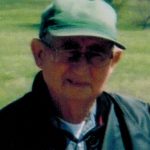 Billy Junior Snodgrass “Junior”, 89, of Memphis, passed away Tuesday, June 30, 2015, at University of Missouri Hospital and Clinics in Columbia, MO.

The son of William Nelson and Anna Maud (Wright) Snodgrass, he was born April 20, 1926 in Scotland County. He attended country schools.

Junior served during World War II in the Pacific Islands with the Army First Calvary Division. He also served with the Occupation Forces in Japan.

On September 5, 1948, he was united in marriage to Norma Smith at her parents’ home north of Arbela. They lived north of Arbela until moving to Memphis in 1965.

Junior owned and operated the Super Saver from 1965-1972. He was then elected Scotland County Sheriff and served from 1973 until 1993.

He was a member of the Arbela Baptist Church and enjoyed gardening. He was a collector of antique John Deere tractors and loved to drive his van and yellow scooter around town.

Preceding him in death were his parents; one sister, Evelyn Jackson; and brothers-in-law, Roscoe Jackson and Hillis Mallett.

Funeral services were held on Friday, July 3, 2015 at 10 a.m. in the Gerth Funeral Chapel in Memphis with Pastor Robert Moseley officiating. Special music was provided by soloist, Sheila Moseley, singing “The Old Rugged Cross,” and “Softly and Tenderly.”