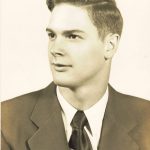 He was an industrial electrician working for the Campbell’s Soup and American Can plants in Liberty Center, OH, before he and Eileen moved to Memphis to become the caretakers at the Farmer’s Lake Campground in 1999.

John was a great story teller.   He enjoyed tinkering with cars, he was a Mr. Fix It.  Most of all he liked spending time with his family.

He was preceded in death by his parents, wife, and three sisters — Helen, Barb and a sister in infancy.

Memorials are suggested to Hospice of Northeast Missouri.