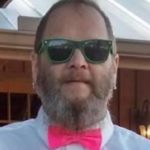 He was born the son of Fred Roy and Mary Frances (Ransford) Orton on March 5, 1962 in Kirksville.

Jeff was a truck drive several years ago. He enjoyed cooking and baking. In his spare time he would shop antique stores, but his grandchildren were his pride and joy.