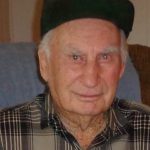 He was born the son of George Edward and Mary Cecil (Caldwell) Hocker on May 13, 1921 in rural Scotland County.

Warren attended the Lowes School and graduated from the Downing High School. He was on the baseball team in high school, and had to walk 12 miles from the farm to school to play ball.

He entered the United States Army in 1945, where he served in the occupation of Japan. He earned the Victory Medal – Army of Occupation Japan for his service.

Warren married the former Vera Ilene Selby on April 5, 1952 at the Memphis United Methodist Church. She preceded him in death on January 16, 1991.

The Hockers settled on a farm in Scotland County. Warren was very strong, often wrestling cattle. His daughter Shirley remember him being able to bend a steering wheel with his bare hands. Along with his strength, he was very healthy, never being sick or ill.

He was an avid baseball fan, listening to the St. Louis Cardinals on the radio. Warren was a simple man who enjoyed simple things.

He was preceded in death by: his wife; parents; sister, Juanita Moffett; a nephew, Stanley Moffett; and a niece, Dottie Moffett.

A graveside service will be held at 11 a.m., Friday, August 4 at the Memphis Cemetery with Mark Drummond officiating. Military rites will be performed by the Wallace W. Gillespie Memorial V.F.W. Post #4958 and the Missouri Military Honors Program.