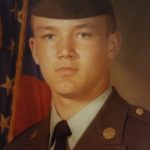 He was born the son of David and Bonnie (Thomson) Hayes on April 28, 1964 in Kirksville.

Jim enlisted in the U.S. Army after high school and was stationed in Germany.

He moved to Fairfield and was employed in many jobs, from driving a truck to working in manufacturing. He was an avid reader, with a variety of interests. Jim enjoyed reading the encyclopedia. He would spend his free time visiting with his friends.

He was preceded in death by his grandparents – Jim Creek, Amy Thomson, Dick Hayes and Wilma Clark.

Memorial services were held at 10:00 a.m., Thursday, July 20 at the Barker Cemetery in northern Scotland County with Larry Smith, pastor of the Downing Christian Church officiating.

Memorials are suggested to the family and can be left at the funeral home.