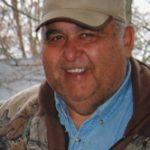 James was born the first son of Floyd A. Baker and Helen R. (Cone) Baker. He was born in Kirksville, MO, on July 23, 1945 and was brought home to Memphis.

He graduated from Scotland County High School in 1963 as the class Vice President and Vice President of FFA. During his high school years he received several FFA honors, including his FFA State Farmer Degree. He also achieved the highest award by earning his FFA American Degree.

After high school he continued to work with his parents at Baker’s Firestone and started his farming career. He enjoyed riding horses, hunting, fishing, traveling, playing cards and bowling. In 1966, he and Phil Cone won the Doubles Bowling City Tournament.

He met Linda Picton on August 1, 1970 and they married 78 days later on October 17th at the New Harmony Church in Curryville, MO. Together they continued the farming tradition while raising their four children.

A heavy snowfall was celebrated with sledding parties and weenie roasts; new ponds were enjoyed with swimming and fishing.

Planting and harvesting of the fields would find his family taking turns riding in the tractors with him and often a meal brought there to be eaten in God’s country.

Sweet corn and green bean seasons found the family in the garage for days preparing food for the winter. Deer season had the door to the farmhouse revolving with family, guests, stories and adventures.

His family celebrated with him many birthdays, weddings, new babies, anniversaries, reunions and holidays often with fireworks and playing cards. Teaching and passing down traditions to his descendants often took place around the table or in his truck.

James was great at finding a reason to get together, and the family was kept close because of it! He will be forever cherished in their hearts and brought with into the future by stories that will be shared with the babies too young to remember or yet to arrive.

James was a member of the First Christian Church and was baptized with his wife and children in 1983. He held a social membership to the Wallace W. Gillespie Memorial VFW Post #4958. He was a member of the NRA, the Scotland County FSA-County Committee Board and the Corn Growers Association.

James and Linda were married for over forty-five years. On his last day, for no apparent reason, he looked at her and said, “Linda, I would marry you all over again.” What a blessing they were to each other.

His family and many in the community will remember James for his great memory, knowledgeable advice and quick wit.

James was preceded in death by his parents; his in-laws, Francis Gurvis and Ina Mae Picton; a special mom, Lucille Cone; and his son-in-law, Andrew Clapp, who was married to Jamie.

A celebration of his life will be held on Thursday, December 3, 2015 from 4:00 – 7:00 p.m. with the family greeting friends at the Scotland County Fitness Center. A private inurnment will follow at Trinity Cemetery at a later date.

Memorials are suggested to the Trinity Cemetery.