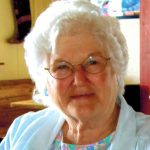 She was born the daughter of Owen Powell Price Jr. and Thelma Beryl (Heath) Price on October 29, 1931 in Clark County.

Isabel graduated from the Wyaconda High School in 1949.   She was the Wyaconda Fall Festival Queen in 1947.   Isabel graduated from the Quincy Beauty Academy in 1950, studying hair, nails and facials.   She worked as a beautician, kitchen manager at Sts. Peter & Paul school in Nauvoo, and a host of other positions.   She also volunteered numerous hours while living in Nauvoo.

Isabel was an avid animal lover, especially her beloved rescue cats – Tiger, Socks, Jacob and Missy.   She was generous to family, friends and her community.   Isabel was passionate about cooking, sharing her meals with everyone.   Her home was always open and she was a friend to all, never meeting a stranger.

Isabel was  member of the Wyaconda Baptist Church.  She was an active community member, especially at church collecting donations for the Missouri Baptist Children’s Home along with many other charities and organizations.   She was a friend to the local Mennonite community.

She was preceded in death by her parents, husbands, nephews, cousins, and a step-child.

Visitation is from noon until 8 p.m., Tuesday, July 14 at the Gerth Funeral Home in Memphis, with the family greeting friends from 6-8 p.m