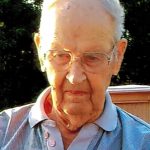 He was born the son of Rhoda Sumner and Nira Delta (Guy) Hamilton on December 28, 1920 in Prosser, Washington.

Howard served in the United States Army from July 1, 1942 to October 14, 1945, serving in Africa and the European Theater — seeing action in Tunisia, Sicily, Naples, Rome, the Rhineland and Central Europe. He received a Purple Heart, bronze service arrowhead along with a European-African-Middle Eastern Theater Service Medal, five overseas service bars and a ribbon for not losing any time.

He worked as a telegrapher for the CB&Q railroad in Iowa and Missouri, then the Southern Pacific Railroad in California following the war.

Howard married the former Vera Ruth Day on April 23, 1949 at the Methodist Parsonage in Keokuk, Iowa. She preceded him in death on August 3, 2011.

The Hamiltons settled on a farm in Arbela. He raised cattle, sheep and crops. Howard retired in 1993, but he remained on the farm. He was a delegate on the MFA Oil Board for several years, was on the Board of Trustees for the Lawn Ridge Cemetery since 1968, and was a lifetime member of the Wallace W. Gillespie Memorial V.F.W. Post #4958 in Memphis. Howard helped organize the Memphis Recreation Center and Pool Hall in Memphis and served as president of the Lawn Ridge Cemetery Association.

He was preceded in death by his wife, parents, and two sisters – Hazel Irene Couch Barlow and Mildred Marguarette Moore.

Gravesite memorial services will be held at 10 a.m., Saturday, August 9 at the Lawn Ridge Cemetery in Scotland County. Officiating the service will be Nate Frazee, pastor of the Scotland County Larger Parish of the United Methodist Church. Military rites will be performed by the Wallace W. Gillespie Memorial V.F.W. Post #4958 of Memphis.

Memorials are suggested to the Memphis Recreation Center and may be left at or mailed to Gerth Funeral Service, 115 S. Main, Memphis, MO 63555.