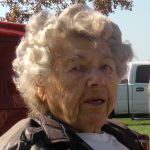 Helen attended the Cone school and then went to the Memphis High School for 2 years.

Helen married Floyd A. Baker on March 3, 1945 in Queen City. They went to the picture show for their “honeymoon” before moving in with Grandpa and Grandma Baker. To this union, two sons were born. Floyd preceded her in death in 1983.

In 1953, Helen and Floyd purchased McLaughlin Firestone, renamed Baker Firestone, which they owned until 1982. The Bakers also had a lime and dry fertilizer trucking business.

She loved her dogs, playing cards, gardening and sewing clothes for all her family. Helen was a member of the Memphis First Christian Church and Wallace W. Gillespie Memorial V.F.W. Post #4958 Ladies Auxiliary.

She was preceded in death by her husband, parents, and a grandson-in-law, Andrew Clapp, who was married to Jamie.

She was also preceded in death by a special friend, Howard Parrish.

Gravesite memorial services will be at 2 p.m., Sunday, June 15 at the Trinity Cemetery on the Baker Farm in rural Scotland County. A celebration of life service in honor of Helen will follow at Johnson Park. Larry Smith, pastor of the Downing Christian Church, will officiate.

Memorials are suggested to the Richland or Brock Cemeteries.