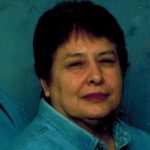 She was born the daughter of Walter and Carmen (Petez) Tovar on May 25, 1943 in Johnstown, CO. Helen graduated from Loveland High School in 1962. She was an accomplished saxophone player and received a music scholarship to the University of Kansas. She didn’t accept the scholarship because she was interested in studying fashion and instead attended Santa Clara College in California. She could only afford one semester, so she worked as a nanny until she was married.

To this union, two daughters were born. The Cones lived most of their married life in Scotland County. They celebrated their 52nd anniversary the day before Helen entered the hospital.

Helen had many jobs throughout her life. She worked at National Garment Factory, Scotland County R-1 as a cook, ran the Memphis City Swimming Pool and worked at Casey’s General Store – but her favorite occupation was as a Family Development Specialist for the Southeast Iowa Community Action Agency. She loved her job there and the families she worked with. She retired from Community Action in June 2007 after 19 years.

She was a devoted volunteer and enjoyed helping others. In 1992, she received an award for Volunteer of the Year in Iowa from Gov. Terry Branstadt. This was one of her proudest moments. Helen was a Girl Scout leader for six years and helped start the Ladies Auxiliary at Scotland County Hospital. She volunteered in Burlington during the 1993 flood. She had recently been keeping hours on Monday at the Memphis Youth Center, saying that the children kept her young. She was on the board of Northeast Missouri Community Action for the past eight years.

Helen enjoyed reading, going to garage sales, having coffee with friends feeding and watching birds. She was a dog lover and always carried treats with her. There wasn’t a dog in the county who didn’t know her.

She was preceded in death by her parents; daughter, Phyllis Milburn and her husband Jim; step father Jim Torres; in laws, Raymond Cone and Lois and Russell Aldridge.

She is survived by her husband, Phil, of the home; daughter Crystal and husband Rob Jones of Excelsior Springs, MO; three grandsons, Sam Jones and his girlfriend, Kelly Cordingly of Lawrence, KS, Preston and wife Shelbee Jones of Kirksville and Zach Milburn of Memphis; a great granddaughter, Annabelle Jones of Kirksville; step mother, Pauline Tovar of Loveland, CO; eight half brothers and two half sisters; two brothers-in-law, Harry and wife Dee Aldridge of Eugene, OR, Steve and wife Yamiko Aldridge of Springfield, OR, and sister-in-law Betty Aldridge of Lincoln City, OR.

A celebration of life service will be held at 2 p.m. on Tuesday, April 26 at the Gerth Funeral Chapel in Memphis with Leland Hyde officiating. Inurnment will be in the Brock Cemetery in Scotland County.

Visitation is from noon until 8 p.m., with the family present from 6-8 p.m., Monday, April 25 at the Gerth Funeral Home in Memphis.

Memorials are suggested to the Tiger Pack Program, in care of the Scotland County Ministerial Alliance and can be left at or mailed to the funeral home.