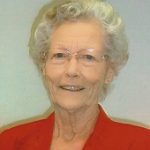 She was born the daughter of Pearl Everett and Arline (McFaden) Morrison on July 29, 1936 in Knox City.

She and Daniel settled in Texas after they were married. She was loved by everyone in her community. The Jeffries’ home was the gathering place for the neighborhood children for generations. She loved and cared for her grandchildren and great grandchildren throughout her life. Hazel was known for her laughter, quick wit, and her enjoyment of life to the fullest. She enjoyed sewing, gardening, and baking for everyone she loved. She visited with elderly friends, volunteered at the Sweeny Elementary School, the Sweeny Police Department and devoted countless hours cleaning the headstones at the Sweeny Cemetery.

Hazel could always be found in recent years uptown eating lunch with her friends and at the Knights of Columbus Bingo Hall on Thursday nights. She will be missed and is cherished by everyone who had the honor to know her.

Funeral services will be held at 2 p.m., Thursday, August 25 at the Memphis First Baptist Church with Pastor Dan Hite officiating. Burial will be in the Gorin Cemetery.

Visitation is prior to the service, from 1-2 p.m., at the First Baptist Church.

Memorials are suggested to the Gorin Cemetery and can be left at or mailed to the Gerth Funeral Service, 115 S. Main, Memphis, MO 63555.