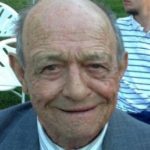 He was born the son of Albert Clayton and Georganna (Kirkpatrick) Gerth on October 9, 1935 in Keokuk.

George was raised in Memphis and served in the United States Army. He and his wife, Joan, moved the family to Branson in 1968 where they operated the Gerth Campground and Camper Park.

Arrangements are under the direction of the Greenlawn Funeral Home — Branson.