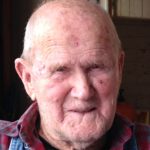 He was born the son of Sherman William and Alma Gladys (March) Durham on June 27, 1921 in Bancroft, Iowa.

Gene grew into a brave, young man who served in the United States Navy during World War II as cook aboard the USS Elvida, a sub chaser, in the Pacific Theatre.  He also served on the USS San Clemente and earned an Asiatic-Pacific Campaign Ribbon, a Philippines Liberation Medal and a Good Conduct Medal for his service.  Gene used the GI Bill to study animal husbandry.

Gene married the former Opal Irene Gordy in San Diego, CA on December 5, 1944 and to this union three children were born: Robert, Margie & Wayne.  She preceded him death on July 15, 1999.

The Durhams began their life together on the family farm in 1948. Together they raised their children, opened their home to friends and family, enjoyed traveling across the country, first with their children and later with their grandchildren and great-grandchildren.   He thought it was important for his children to see the USA and see the national parks.   The Durhams operated a successful cattle and grain farming operation.

Gene was a founding member of the Scotland County Rural Fire Department and served for 41 years. He was an active member of Mt. Moriah Methodist Church. He enjoyed: spending time with and talking to people, all kinds of people; at church singing hymns; at the Scotland County Antique Fair — visiting on the square and staying until the band was packing up; at Camper Rallies with his camping friends – The Missouri Show-Me Dreamers – including his children and grandchildren in his camping adventures whenever he could; at John Deere Dealer “Invitation Only” events to see the newest machinery put to work; at family birthday parties, anniversary parties, cousin get-togethers, baptisms, weddings, and even the sad get-togethers; and at his home where his children, grandchildren and friends were always welcome to play, cuddle, sing, get muddy, build snowmen and so much more.

He was a member of the Mt. Moriah Methodist Church until its closing when he transferred membership to the Arbela United Methodist Church; the Show Me Dreamers Camping Club; Tri-CountyElectric Co-Op and Northeast Missouri Rural Telephone Co-Op.

Funeral services will be at 3 p.m., Friday, August 25 at the First Baptist Church in Memphis with Dan Hite officiating.  Burial, with military honors performed by the Wallace W. Gillespie Memorial V.F.W. Post #4958 and the Missouri Military Honors Program, was in the Mt. Moriah Cemetery.

Memorials are suggested to the Mt. Moriah Cemetery or the Great River Honor Flight.