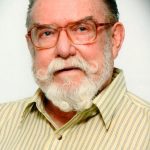 The son of the late Steve and Dorothy (Hartman) Bowdish, he was born in Valentine, Nebraska, on June 18, 1934.

Gene served in the United States Navy aboard the aircraft carriers USS Kearsarge, USS Bennington and the USS Coral Sea as a helicopter mechanic. He was honorably discharged September 7, 1956 with honors.

He was a professional photographer while residing in Leonard, Missouri and then worked for 23 years at Caterpillar in Davenport until his retirement. He was an avid outdoorsman and enjoyed camping and fishing.

Preceding him in death were his parents; sisters, Cheryl Snowbarger and Carolyn Tuck.

Gravesite services will be held on Thursday, June 11th at the Memphis Cemetery with Pastor Jack Sumption officiating. Military graveside rites will be performed by the Wallace W. Gillespie Memorial Post #4958 of Memphis.

Memorials are suggest to the St. Jude Children’s Research Hospital or donor’s choice.