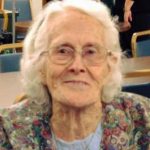 She was born December 21, 1921, in Scotland County, the daughter of Everett and Gladys (Arnold) Robinson.  She married Wayne Baker on October 25, 1939, in Luray.  To this union, four children were born: Louise, Wayne Jr., Wanda, and Nancy.

Esther enjoyed her family above all and always put it first.  She spent the first part of her married life as a devoted, hard-working farmer’s wife.  Later in life she spent many years working at Drydens Black Rubber in Keokuk.  She was very active with the Scotland County Hospital Auxiliary, Antique Fair Association, sewing, embroidery, and gardening.  She was a long-standing member of the First Baptist Church in Memphis and was very active with blood drives and caring for others by providing food and service to those in need.

Funeral services will be held at 11 a.m. on Wednesday, January 20, 2016 at the Gerth Funeral Chapel with Dan Hite, pastor of the First Baptist Church, officiating.   Visitation is prior to the service, from 9-11 a.m., on Wednesday at the funeral home.

Interment was in Friendship Cemetery in Scotland County.

Memorials have been suggested to Friendship Cemetery.