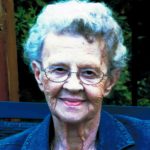 She was born on March 23, 1927, at home south of Rutledge in Benton Township, in Knox County, Missouri the daughter of John and Ula Arehart Kassahn and was welcomed by sister, Winnie.

Eilene married Hillis McCabe at her parents’ home on July 13, 1947 surrounded by their beautiful flower garden. Hillis preceded her in death on June 4, 2007. To this union three daughters were born.

Eilene walked to Millport to attend grade school and when her sister started high school they walked to the Rutledge School, from where she graduated. She was “Baby” in the school play “Bringing Up Baby”. Eilene also played on the girls’ basketball team. She moved to Kansas City, following graduation, to work at Pratte Whitney and then to Ft. Madison to work at Schaefer Pen. When she visited Rutledge, she rode the “Doodle Bug” train. She returned to Rutledge after she married Hillis.

She was a wonderful homemaker – cooking delicious meals for her family. Eilene had a large garden and raised chickens for butchering and made many of her children’s clothing. Eilene sold Avon as a part-time job.

She worked in the “cook shack” at the Irvin Johnston’s Dog and Flea market. When the Methodist Church consolidated with Memphis, she and her good friend Marge Ward came up with the idea of purchasing the building for the Rutledge OES and Masonic Hall. It was from this idea that started the ladies’ 35 year career of managing the “cook shack” to raise funds for this purchase and other non-profit organizations in Rutledge and surrounding communities.

She enjoyed spending time with her family – visiting and participating in a lot of fun activities, celebrating birthdays and the holidays together. Her grandchildren and great- grandchildren were the apples of her eye. She was a loving and caring wife, mom, grandmother, sister and sister-in-law who will be sadly missed by her family and friends.

Funeral services will be at 1:30 a.m., Saturday, December 15, 2018 at the Gerth Funeral Chapel in Memphis with Jon Guthrie officiating. Burial will be in the Pauline Cemetery in Rutledge. An Eastern Star service will be performed by the Rutledge Eastern Star Chapter #343.