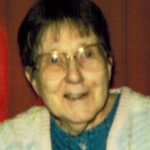 She was born the daughter of Ornal Oren and Zela (Howard) Reynolds on January 19, 1934, in Scotland County MO. Doris attended schools in Rutledge and Baring, graduating in 1952. Doris graduated from the Quincy School of Cosmetology in 1956.

She was a beautician and owned Doris’ Beauty Shop while living in Carrollton, MO and Wyaconda. She was a member of the First Baptist Church in Carrollton and had been a resident of the Mar-Saline Manor Care Center in Marshall since November of 2006.

She was preceded in death by her parents, husband, six sisters in law, six brothers in law, a niece and a nephew.

Funeral services will be held on Saturday, April 5, 2014 at 2:00 p.m. at the Gerth Funeral Chapel in Memphis with Dan Hite, pastor of the First Baptist Church, officiating. Burial will be in the Pauline Cemetery in Rutledge.

Visitation will be held on Saturday prior to the service from 12 noon until 2:00 p.m. at the funeral home.