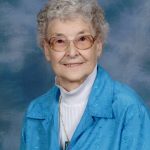 She was born the daughter of Elzey R. and Zella F. (Alderton) Caldwell on August 8, 1925 in Knox County.

She was a retired elementary school teacher in the Canton, MO, public school system.

Dorcas was a member of the First Baptist Church in Canton. She dearly loved her church, her family and her Lord.

She was preceded in death by her parents, husband and her brother, Raymond Caldwell.

Funeral services will be at 1 p.m., Thursday, November 7, 2013 at the First Baptist Church in Canton with Rev. Brian Stone officiating. Visitation is an hour prior to the service, from noon until 1 p.m., at the church.

Burial will be in the Etna Cemetery.

Memorials are suggested to the First Baptist Church of Canton or to the Lewis County Nursing Home and may be left at or mailed to Gerth Funeral Service, 115 S. Main, Memphis, MO 63555.