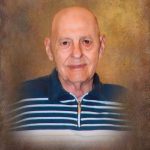 Organization or Charity of Donor's Choice

He was born the son of John Benjamin and Retta (Bills) Shelton on February 14, 1927, in Memphis. He was raised in Memphis, where he attended high school.

Donald was inducted into the United States Navy on April 3, 1945, serving during World War II. He earned the American Area, Victory Medal and Asiatic Pacific. Donald was honorably discharged with the rank of Seaman First Class on July 6, 1946, in St. Louis, Missouri.

He married the former Patricia Evelyn Thompson on June 5, 1947, in Troy, Kansas, and to this union arrived thirteen children to bless their home. Don and Pat shared 66 loving years of marriage together. She preceded him in death on June 4, 2013.

Donald was employed for Monsanto Company in Addison, Ohio, retiring in 1989, after 33 years of service. He was a former police officer for the City of Rising Sun, Indiana and worked for Seagram’s Distillery in Lawrenceburg, Indiana, for several years. Don resided the past 24 years in the Switzerland County community and will be remembered for his love of golf.

Gravesite services will be at 11 a.m., Monday, March 6 at the Memphis Cemetery with Dan Hite, pastor of the First Baptist Church in Memphis, officiating.