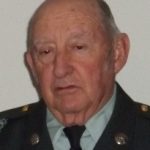 He was born the son of Robert A. and Maude (Corwin) Norton on October 13, 1932 in a house north of Bible Grove that belonged to his grandfather, Oliver Corwin.

Don attended schools in the area while growing up, including Knox County, Baring, and Bible Grove before graduating from Scotland County R-1 in 1949.

Don was inducted into the armed forces after the birth of their first child. He served in the Army of the United States from 1953-1955, stationed in Germany.

The Nortons were involved in farming and raised pure bred charolais cattle. Don also worked in construction. He was appointed Scotland County Collector in 1964 and served in that position until 1983. Thereafter, he was employed by the county to serve as Director of Equalization until that project was completed. In 1987, he started work for the NRCS on a part time basis, as well as for the Scotland County Soil District where he completed 20 years of service in 2008. In 2000, he obtained a real estate license and began working part time at Primrose Realty, where he worked until his death.

Funeral services will held at 10 a.m., Saturday, November 26 at the Gerth Funeral Chapel in Memphis with burial in the Bible Grove Church of Christ Cemetery. Officiating the service will be Dan Todd. Military Honors will be provided by the Wallace W. Gillespie Memorial V.F.W. Post #4958 of Memphis and the Missouri Military Honors Program.

Memorials are to the Bible Grove Church of Christ Cemetery.