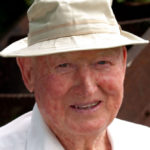 Don Darell Tague, 96, of Gorin, MO, passed away December 3, 2021 at the Harry S. Truman Memorial Veterans’ Hospital in Columbia, MO. Don was born at home on the Sandridge Bottom northwest of Gorin on November 18, 1925 to Charley Tague and Elsie Boltz Tague. Don was known since childhood as “Buck” by family and friends. He graduated from Gorin High School in 1943 and was a lifetime member of the Gorin Christian Church.

Don was inducted into the U.S. Army in March 1944, completed basic training at Camp Shelby, MS, and departed for Europe in early January 1945. Don served in Patton’s Third Army, the 65th Infantry Division, and due to his advanced training, good eyesight, and left-handedness carried the Browning Automatic Rifle (B.A.R). Near the end of the war, Don’s division helped liberate the Mauthausen Concentration Camp, meeting the Russian Army near Enns, Austria, where they stayed at the St. Florian Monastery for restoration efforts, before returning stateside in May 1946. He returned to service in 1950 as a reservist in the Korean War. He served in the 79th Engineers Construction Battalion, because of his skills operating heavy equipment. Don spent much of his time building structures and assisting with the evacuation of those who survived at the Chosin Reservoir. He faithfully attended his 65th Division, 79th Engineers, and Chosin Few reunions, bringing family with him and sharing memories with friends.

Don was a heavy machinery operator for most of his working life, and traveled often to help build roads and pipelines. He was a proud member of the International Union of Operating Engineers and retired at age 71. He had many life-long friends from his work travels, often calling them on birthdays and holidays.
Don served at Sergeant of Arms for the Gorin Memorial Day Service for many years, and celebrated this year with a large crowd gathered at the Gorin Cemetery. He was a member of the Memphis Masonic Lodge #16, earning his 50-year pin in 2009. He was Past Master of the Gorin and Rutledge Blue Lodges. Don enjoyed staying up with current events, living on his own, taking his sisters to dinner, visiting with family and friends, hunting with his children and grandchildren, and growing an extended family garden. Don enjoyed attending the Gorin Alumni Banquet in October.

His life will be remembered as one of service, hard work, family, community connections, and numerous good stories.