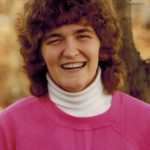 Dixie was born July 8, 1963 in Kirksville, the daughter of Eli “Buster” and Mildred (Morrison) Parrish.

Dixie was an employee of Industrial Opportunities in Kahoka for over 30 years and enjoyed her special friendships there.

She never knew a stranger and never forgot anyone that she met. Dixie especially enjoyed going to Camp Guardian each year, which was sponsored by the Missouri National Guard. She enjoyed showing her camp pictures to everyone and being teased about all of her camp “boyfriends”.

Dixie was an avid Wahoo player and always played with the yellow marbles. Her family enjoyed playing on a board her mother made, and had renamed the name “Get Dixie”. She also enjoyed watching movies and listening to music, especially anything that had Dixie in the title. She was an avid Coca Cola collector and loved drinking Coca Cola as well.

She was preceded in death by her father; three sisters, Melba and Wilma Parrish and Nellie Zweifel; two nephews, Josh and Scott Pinson; special aunts, Elma Chancellor and Hazel Jeffries.