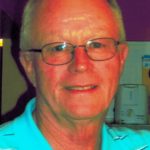 He was born the son of Ray Thomas and Nellie Louise (Robinson) Baker on June 15, 1950 in Kirksville.

Dennis graduated in 1968 from Memphis High School and earned a degree from drafting school in Quincy.

He married the former LaDonna Yoder on August 11, 1973 at the Memphis United Methodist Church. She survives.

Dennis enjoyed working on cars and spending time with his family. He enjoyed going fishing, but never got around to casting a reel himself because he was always fixing lines and baiting hooks for others.

He was preceded in death by his parents and a brother, Hobart.