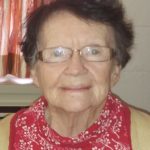 She was born the daughter of Casper Paul and Wanda (Davis) Smith on March 17, 1925 in Wapello County, Iowa – east of Ottumwa in the Eldon/Blakesburg area. She lived on different farms in Southeast Iowa, which provided many rural experiences, including caring for livestock, gardening, helping raise her 9 younger brothers and sisters, showing cattle at the local 4-H, sewing, cooking, canning, and learning the values of hard work.

She married Harvey Allen, Jr. on October 12, 1943 before he left to fight on the Pacific Front. Darlene moved to Des Moines to live with her cousin, Helen. She worked in a factory making tents for soldiers until Harvey returned home after the war.

The Allens moved to Wapello, Iowa. A daughter, Amanda Jean, was born in 1947 and a son, Richard Fern, in 1949. The family moved to Bible Grove in 1950. Darlene worked on the farm was a stay at home mother until her children moved away. She then worked the nightshift at Hollisters in Kirksville, making medical supplies. She worked there several years, before retiring and continuing farming.

She was independent, ornery and proud of it. Darlene loved traveling and visiting family and friends. She treasured all of her dogs and being the life of the party. Darlene was a kid at heart, enjoyed playing with children, watching cartoons and was known as “Granny” to all.