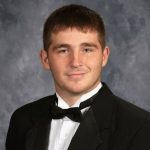 Chester Eugene Robinson, 18, of Memphis died May 24, 2016 as the result of a motor vehicle accident north of Memphis.

The son of Michael Eugene Robinson and Patricia Ann (Nolan) Yardley, he was born September 30, 1997 in Memphis, MO. Chester attended Scotland County schools and was a 2016 graduate of the Scotland County High School.

During his school years he was a valuable team member and letterman who played with the Scotland County High School football team. He belonged to the Memphis FFA Chapter.

Chester worked for many farmers in the community and volunteered for many organizations, including the Scotland County Fitness Center and daycare. He had recently given a total of 2 ½ gallons of blood during his school years.

He loved hunting, fishing and other outdoor activities. He also enjoyed Chevy trucks.

He was preceded in death by one sister, Crystal Nolan; his stepfather, Jerry Chuites; uncle, Bobby Nolan; and grandparents, Gerald (Cotton) and Verlee Robinson and George and Carol Nolan.

Survivors include his father Michael Robinson of Memphis; his mother, Patty and husband Jack Yardley II of Queen City, MO; his sister, Merna Joy Nolan and Shawn Porter of Tacoma, WA; his brother, Jashua Robinson of Memphis, MO; and many other family members and friends.

Chester had many great friends and was respected among his peers.

Funeral services will be held on Saturday, May 28, 2016 at 11 a.m. in the Scotland County High School with Pastor Sonny Smyser of the Schuyler County Church of Faith officiating. Burial will be in the Friendship Cemetery northwest of Memphis.

Memorials are suggested to the family in care of Gerth Funeral Service.