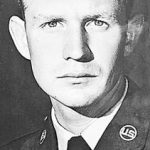 He was born on September 19th, 1948 in Greenwich, CT, the son of Charles “Chuck” and Jane McQuoid.

He spent his childhood in Cincinnati, OH.  He was a 1967 graduate of Culver Military Academy, where he rowed crew.  From 1969 to 1972, he served in The United States Airforce as a Pararescue Specialist, where his main duty was as a medic for a helicopter rescue unit.  He served tours in Korea and Vietnam achieving the rank of Sergeant.  He was the recipient of two Silver Stars, two Air Metals and a Distinguished Flying Cross.

He was employed as a Certified Public Accountant by The Airolite Company in Marietta, Ohio, and was later the CFO of Taylor Woodcraft in Malta, Ohio.

Said his fellow Airman upon learning of his death:  “When I was with him in the early days, he had such a great and kind laugh.  Many times his demeanor was that of a royal king, and I would remind him to get down here with the rest of mankind.  He would help anyone in need and he was fearless in combat.”

Gravesite memorial services will be held at 10:30 a.m., Saturday, September 19 at the Memphis Cemetery.    Military honors will be performed by the Wallace W. Gillespie Memorial V.F.W. Post #4958 of Memphis and the Missouri Military Honors Program.

Memorials are suggested to the Wounded Warriors Program and can be left at or mailed to the funeral home.