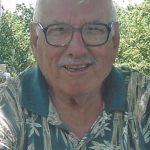 He was born the youngest child of Carl and Rilla Faye (Adams) Overfield on November 2, 1934 in Memphis.

Cecil was a farmer’s son and graduated from the Memphis High School.

He married the former Rosa Frost, the love of his life. She survives.

Cecil went to work for Caterpillar in Joliet. In 1984, he retired after 30 years, and he and Rosa retired to Glencoe, AR.

He always thought long and hard before he spoke. He spoke slowly and softly but spoke effectively. Cecil would advise his family through select bits of wisdom and humorous anecdotal stories. It was a joy to listen to him. He will be remembered for his solid, down to earth demeanor and his endless love of his family.

Cecil enjoyed bowling and going to Tunica, MS, with his lovely wife Rosa to play the slot machines – he won more than he lost. He was an avid collector of M&Ms – you would often see him wearing his very cool M&M jacket. Cecil had an uncanny ability to skillfully and quietly win at family game night. Family members jockeyed to sit next to him during game night hoping that a little of his luck would rub off on them.

He was known to his children and grandchildren by many names, including Dad, Pops, Papa and Grandpa.

He was preceded in death by his parents and siblings.

A gravesite service was held at 2 p.m., Saturday, June 6 at the Lawn Ridge Cemetery in northern Scotland County, officiated by Dan Hite, pastor of the Memphis First Baptist Church.

Click here for directions to Lawn Ridge from the funeral home.