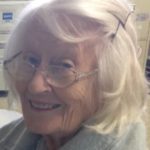 She was born the daughter of William and Lena (McLaughlin) Harvey on September 10, 1928 in Crawfordville, FL.

Carol was a member of the Crawfordville Baptist Church, where she was saved during her teen years.

She attended Crawfordville High School, participating on the basketball team, before graduating in 1946.

Carol married William Baron “Billy” Allbritton on August 5, 1950. The Allbrittons raised two children in Tallahassee. He preceded her in death on March 20, 2004.

Carol graduated from Florida State University with a degree in Business Education in 1950. She taught business education (typing, short hand, accounting, etc.) at Florida High School in Tallahassee. She retired in 1989 after 30 years of service.

Carol was a member of the Golden Girls in Wakulla County for many years and she adored socializing with this group of ladies. She was also active in the Teachers’ Retirement group, which met frequently for social engagements.

She joined the First Baptist Church in Tallahassee and was a member of the Friendship Sunday School Class. Carol moved to Memphis for the last decade of her life, attending the First Baptist Church where her son-in-law, Dan Hite, serves as pastor. Affectionately known as Meemaw, she was involved in the Senior Adult Sunday School Class and the Joy Group.

She was preceded in death by her husband, parents, and a brother Wendell Harvey.

She is survived by her son, Britt Allbritton of Austell, GA; daughter, Nancy (Dan) Hite of Memphis; three grandchildren: Joseph, Evan and Claire Hite, all of Memphis.

Funeral services will be held at 1 p.m., Monday, November 13 at the Culley’s Meadowwood Funeral Service in Tallahassee, FL with burial in the Crawfordville Cemetery.

A remembrance service and open house will be held from 6-8 p.m., Friday, November 17 at the Fellowship Hall at the First Baptist Church in Memphis.

Memorials are suggested to the Florida Baptist Children’s Home