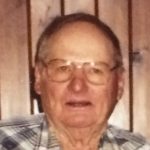 He graduated from the Gorin High School in 1947.   Bruce served in the U.S. Army and was stationed at Ft. Leonard Wood.  He was a 50 year Mason, a member of the Memphis A.F. & A.M. Lodge #16 in Memphis.  He was a life-long member of the Gorin Christian Church.

Bruce married the former Vera Olean Welker on January 28, 1961 in Williamstown.  She preceded him in death on October 28, 2016.

Bruce farmed and worked as a land improvement contractor.   The Tagues were involved in many years in LICA (Land Improvement Contractors of America) and traveled extensively, including to Hawaii as part of LICA.

Funeral services will be held at 10 a.m., Thursday, July 27 at the Gerth Funeral Chapel with Bubba Eder, Larry Howell and Jim Campbell officiating.  Kathy Campbell and Becky Zahn will perform a musical tribute.   Burial will be in the Gorin Cemetery.

Memorials are suggested to the Gorin Cemetery Maintenance Fund.