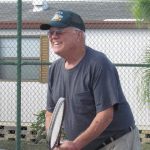 He was born the son of Leland and Irma (Burrus) McRobert on August 14, 1941 in Scotland County.

Bill married the former Sharon Fountain on August 12, 1962 at the First Christian Church in Memphis. She preceded him in death on January 15, 2007.

Bill was passionate about physical fitness and loved to play tennis. He was a fierce cribbage player, especially with his brother Max. Whenever they were together, they stayed up late and got up early to play, religiously keeping track of their matches to see who was winning. They played thousands of games together, up until just a few weeks ago when Bill’s health failed.

Bill was very dedicated to his grandchildren. He attended as many of their activities as possible.

He most enjoyed helping people, no matter the job. He was always doing something for his family, neighbors and friends be it loaning them his car or helping to put in a new floor. Helping others was very important to Bill.

He was preceded in death by his wife, Sharon; parents, Leland and Irma; father-in-law and mother-in-law, Raymond and Dorothy Fountain; and a brother-in-law, Carl Fountain.

He is survived by his children, David and wife Lana McRobert and Sheri and husband Joel Kapfer, all of Memphis; a brother, Dr. L.M. “Max” McRobert and sister, Ila McRobert, all of Venice, FL; and a sister Shirley and husband Paul Townsend of Keokuk, IA; grandchildren, Will, Grant, and Charlotte McRobert and Jacob Kapfer, all of Memphis; a brother-in-law, Vernie and wife Joy Fountain of Springfield, MO; a special friend, Carol Burrus, of Venice; many nieces, nephews and friends.

Funeral services will be held at 10 a.m., Saturday, February 6 at the Gerth Funeral Chapel in Memphis with Jack Sumption, pastor of the First Christian Church, officiating. Burial will be in the Greensburg Cemetery.

Visitation is from 12-8 p.m., Friday, February 5 at the Gerth Funeral Home with the family greeting friends from 6-8 p.m. A masonic service will be held at 8 p.m.

Memorials are suggested to the Greensburg Cemetery or the Scotland County Community Fitness Center.