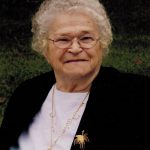 She was born on April 6, 1927, in Willmathsville, the daughter of Walter Leroy and Dora G. (Herrmuth) Davis. Betty grew up in Scotland County and attended Gorin High School until the tenth grade.

She married Elbert (Beab) Herring on November 20, 1947, and to this union five children were born: Patricia, Vickie, Hazel, William and Cathy. Beab preceded her in death on July 16, 1987.

She was a Christian and was recently baptized.  She was a faithful reader of the Bible.

Betty painted and quilted until she no longer had use of her hands. She enjoyed her word search books and, of course, bingo. She played the guitar and loved music and dancing.

Betty was a member of the Wallace W. Gillespie Memorial Post #4958 Ladies Auxiliary in Memphis where she was president for one year. She was a former president of the Gorin School PTA.

Her love of family members and friends enabled her to be a wonderful caregiver.

Funeral services are at 10 a.m., Friday, November 27, 2015 at the Gerth Funeral Chapel in Memphis with Reverend Leon Buford officiating.  Burial will follow in the Hickory Grove Cemetery, near Arbela.

Visitation is prior to the service from 9-10 a.m. at the funeral home.

Memorials are to the activities department of the Scotland County Care Center.