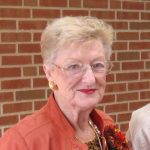 She was born the daughter of Delmar and Kathryn Saxton on March 26, 1929 in Kansas City, MO.

Betty graduated from the Memphis (MO) High School in 1947.

They had four children: David, Donita, Sherry and Scott.  The Robbins lived and farmed east of Memphis until Donald’s death.  Betty moved to the Lake of the Ozarks area in 1984.   She later moved to Jefferson City.

Betty worked for many years in retail clothing and had a flare for fashion.  After her retirement, she enjoyed gardening and decorating her home.

She was preceded in death by her husband; daughter, Donita Kay Robbins; and son, Scott E. Robbins.

Visitation is at the church, prior to the service on Tuesday from 10 a.m. until noon.

Memorials are suggested to the Conyers Cemetery and can be left at or mailed to the Gerth Funeral Service, 115 S. Main St., Memphis, MO 63555.