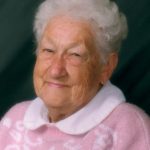 She was born the daughter of Noah and Adda (Bondurant) Kapfer on June 30, 1923 in Wyaconda, MO.

Anna graduated from the Wyaconda High School. She married Eldon Dice on December 28, 1947 in Memphis, MO. He preceded her in death on October 7, 1986.

Anna loved being with her family and always with a meal. In her earlier years, she enjoyed playing cards with her friends. Anna was fond of gardening, reading, puzzles and playing games with her grandchildren.

She was preceded in death by her parents; her husband; brothers, Wendell and William Kapfer; parents-in-law, Charley and Matilda Dice; In-laws Twila Kapfer, Nick and Grace Conkle, Rudolph and Della Dieterich, Karl and Reta Dice, and Marie Dice; two nieces, Wilma Stott and Linda Diffine; and a nephew, Ernest Kapfer.

A Celebration of Life Service will be held Saturday, June 28, 2014 at the Wyaconda Baptist Church. A time will be announced later.

Memorials are suggested to the Wyaconda Cemetery or to the Good Samaritan Home.