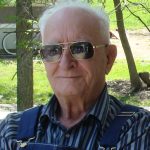 Alvin spent his childhood in the Bloomfield and Lancaster, MO, area.  He was drafted into the Army of the United States on December 4, 1944, serving until he was honorably dischared on September 5, 1946.   Alvin was awarded an American Theater Ribbon, Victory Medal and Good Conduct Medal for his service.

The Ayers spent many years farming south of Wyaconda, before Alvin retired when he turned 55.   Alvin and Donna then traveled for many years, spending the winters in Arizona and Texas.

Alvin enjoyed being with his family and looked forward to Sunday morning breakfast and playing pinochle.

He was preceded in death by his parents, nine brothers and sisters, his wife, his daughter Debbie and son Randy.

Funeral services will be at 10 a.m., Tuesday, July 3 at the Gerth Funeral Chapel in Wyaconda with Alvin’s grandson, Tim Ayer officiating.

Burial, with military honors, will be in the Wyaconda Cemetery.

Visitation is from 2-8 p.m., Monday, July 2 at the Gerth Funeral Home in Wyaconda with the family greeting friends from 6-8 p.m.