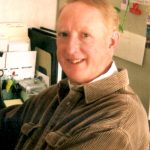 Allen was a member of the Gorin Baptist Church and growing up was very active in all Gorin school, church and sports activities.  He graduated from the Gorin High School in 1965.

Allen moved to Sedona, AZ, in 1999 where he enjoyed the beautiful country and his many friends there.   At the time of his passing, he was employed by the Sedona Chamber of Commerce.

He had a great sense of humor and liked practical jokes.   Allen’s love of travel led him to Russia, South America, and many other corners of the world.  In his spare time he enjoyed cooking, camping, skiing and caring for his dogs.

Mr. Hustead was preceded in death by his parents; grandparents, Hatton and Lena Hustead and Henry and Marie Meyer; and brother in infancy.

He is survived by his life partner, Vincent Chris, of Sedona, AZ; sister and brother-in-law Judy and husband Ronnie Boyer of Arbela; aunt and uncle, Eugene and Norma Hustead of Branson; nieces, nephews, cousins and many friends.

Cremation was accorded and memorial services are scheduled for 11 a.m., Saturday, September 3 at the Gerth Funeral Chapel in Memphis with Rev. Leon Buford officiating.   Visitation is at 10 a.m. prior to the service.

Memorials are suggested to the American Cancer Society, the Northern Arizona Hospice or donor’s choice and may be left at or mailed to Gerth Funeral Service, 115 S. Main, Memphis, MO 63555.