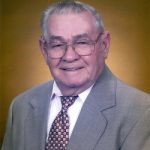 He was born the son of Laurence and Opal (Echelberger) Stott on June 15, 1928 in rural Scotland County.

The Stotts farmed and raised their family in Scotland County.  They bought their farm in 1959, and farming was his life. Lavern strongly believed in hard work, and was very proud of his farm with his registered Angus cattle and horses.  He had hoped to live long enough to see the house turn 100 years old in 2017.

But he also lived life to the fullest.  The Stotts enjoyed square dancing and watching basketball games.   Family was very important to him, especially his grandchildren and great grandchildren.   He tried to attend as many of their activities as possible, be it hockey, basketball, football or other functions.

Lavern enjoyed traveling, visiting much of the United States, including Alaska and Hawaii.

He was preceded in death by his parents; wife; a brother, Donald Stott; a sister, Neva Cain; and a sister-in-law, Leta Mae Stinnett.

Funeral services are at 2 p.m., Wednesday, December 26 at the Memphis First Christian Church with Seth Wortman officiating.  Burial will be in the Prairie View Cemetery.

Visitation is prior to the service on Wednesday, from 1-2 p.m. at the church.

Memorials are suggested to the First Christian Church or Scotland County Hospital.